Warning: "continue" targeting switch is equivalent to "break". Did you mean to use "continue 2"? in /homepages/29/d217113380/htdocs/clickandbuilds/WordPress/MichelleGeorgePhotography/wp-includes/pomo/plural-forms.php on line 210
 Shooting Beauty with Rotolight | Michelle George Photography 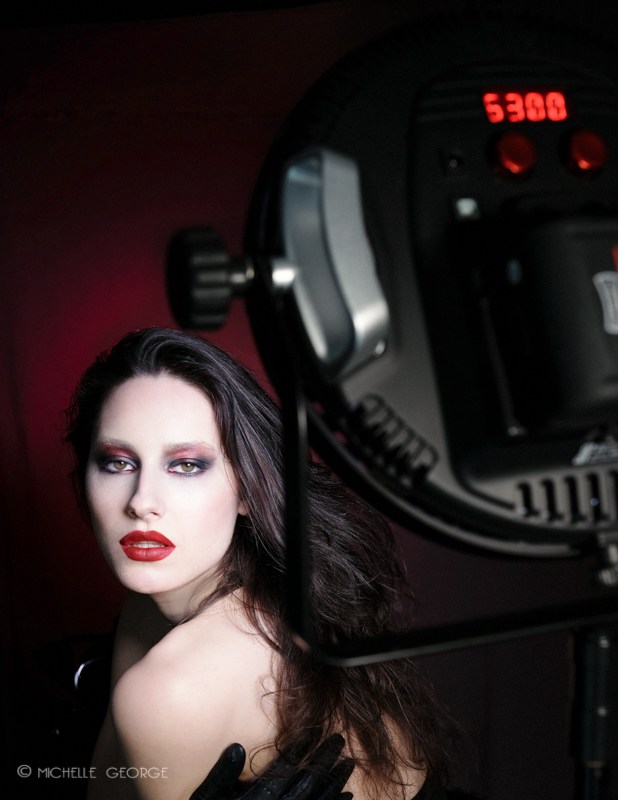 As you may recall I have been using Arri lighting for quiet some time. I’m a big fan of it’s cinematic style and prefer a continuous light source where you get to see the effects through the viewfinder rather than waiting on the flash; But as I’m currently in-between studios Arri lighting is not the most transient friendly. For one, the 800 watt lamps I had  required a plug socket; two, the case alone felt like it weighed a ton and three the lamps get super hot and I was often seen on set wearing oven gloves.

Rotolight is an award winning LED lighting company that produces Tungsen light equivalent. I have been using Rotolight Neo 1 for over a year now as I found it super portable (only 145mm in diameter and weighting at a mere 354 grams) It also has the added bonus of being battery operated and the light it produces is exceptional (see beauty shot with it here) The only downside was the output (1077 lux) was nowhere near as strong as the Arri 800watts, despite the website claims to be a 707 watts equivalent?! Nevertheless, it impressed me enough to decide to invest in it’s bigger brother the Aeso.

The Aeos is also battery operated though somewhat bigger and heavy ( 1.4 kg in weight, 295 mm in diameter) and over 5 times more powerful than it’s younger brother the Neo 1((5750 lux). Along with the Aeos I also purchased some light modifiers including the barn doors, softbox and honeycomb louver (not yet available). The main advantage of the Rotolights is you can adjust not only adjust the light output but you can also adjust the colour temperature (3150 kelvin to 6300 kelvin). I took advantage of this feature to modify skin tone with the overall make up look.

For the next set up the Rotolight Aeos was used in a loop lighting position to the right of the model at a 45 degree angle. The Rotolight Neo 1 was placed behind and to the left of the model with a red FX gel projected onto a medium grey back drop. Colour temperature was set slightly warmer at 5300 kelvin.

Same lighting set up with a slightly warmer colour temperature:

For the next set up I wanted to create a fresher cleaner look so I kept  the colour temperature the same but instead of using the AEOS I used two Rotolight Neo’s either side of the model as below:

Verdict: Over all I am pretty impressed with the performance and the AEOS. It is much more powerful than  the Neo and not a hotspot in sight. The light is fluid and even. I shall look forward to playing with more of it’s features as time goes by including the HHS flash.

Make up by Viktor Charles using NudeStix and Kevyn Aucoin